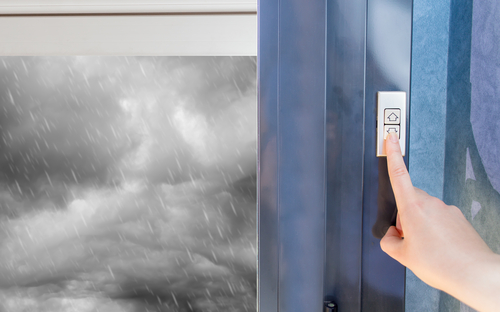 Are you looking to add a set of quality exterior aluminium shutters for your home? These screens make an excellent investment for people residing in hurricane-prone areas or merely desire the added safety benefit that they offer.  In countless cases, these shutters have made the difference between keeping one’s home intact and being left with nothing as a result of a disastrous hurricane.

Hurricane shutters are readily available in various kinds.  The price of aluminium shutters can be significant hence you would do well to learn about the different options available and opt for the one that best suits your needs and preferences. Ultimately, it is up to the property owner to decide which style to choose.

Perhaps the most popular type of all the aluminium shutters available in the market. For house owners who decide to set up these kind of screens, they will need to set up metal tracts that will hold the sheets of steel or corrugated aluminium in place. The storm panel type is produced in a fluted style so that the pieces can overlap over one another providing an even more powerful resistance to hurricane-force winds.

Just as the name suggests, the accordion design opens and shuts just as an accordion would. They are fitted as an integral part of one’s home and fold like an accordion on either side of the windows for storage.

Many homeowners prefer the accordion type as it proves the optimum level of security from a hurricane’s strong and gusty winds. Also, several homeowners want to have the accordion style setup as they can be quickly deployed and retracted as needed.

Colonial hurricane shutters are another type of protective window shutters that can be fitted onto your home for fending off severe damage due to adverse weather. These screens are produced in a horizontal, slat-like style, much like the old colonial style of window shades. Two pieces lock together in the middle of the window, covering the window as protection against the storm. Most variations of colonial shutters require a road to be placed at the centre of the window to hold the screens together. Hence, it can take much longer to prepare for a storm — time that could have been used for other preparations.

Although colonial shutters are still in use, they are not as popular as the other shutters. They are secured to the house permanently, which can be a huge convenience in case of an emergency like getting locked out of your home. They likewise come with elaborate designs to appease even the most discerning of property owners.

Nearly identical to the colonial style, except they are available in one piece instead of two. These shutters are set up as permanent components in the home and are available in various designs. Some property owners will not work with the Bahama design, as they feel these are ineffective compared to other types of hurricane shutters. These shutters are not as rugged and robust as others which can be a concern for property owners.

Perhaps the best type among hurricane shutter systems, although it is also the most expensive. The shutters can be put into place with a push of a button as they are installed at the top of the windows with a long metal receptacle that houses the shutters. Once a centralised button is pressed, the roll-down shutters will drop from the top and cover the windows.

Securing one’s home is the most important goal when choosing hurricane shutters. It is essential to understand which ones work well with your preferences and the budget you have in mind. Phone us today on 1300 853 206 or Check out some of our great deals on aluminium patio shutters and other window treatments for your home here at “Shutters Australia”.

The Advantages of Using Motorised Alfresco Blinds for your Sydney Home